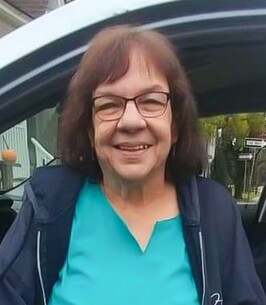 Thomas, Anita L. (Lippa)
Hilton: Saturday, May 7, 2022, at age 65. Predeceased by her parents, Vincent & Clara Lippa; sister, Rosann Kennedy. She is survived by her loving and devoted husband of 37 years, Douglas P. Thomas; step-children, Jenny (Josh) Consler, Paul (Ashley) Thomas; children, Douglas V. (Emily) Thomas, and Theresa (Brandon) Williams; grandchildren, Hunter, Robert, and Nathan Consler, Evan, Julia, Jack, Annalia, Alexander, and Pauli Thomas, Brooklyn, Jameson, Owen, and Adalyn Thomas, Landon and Paisley Williams; brother, Sal Lippa; sister, Donna (Paul) Savastano; brothers-in-law and sister-in-law, Dennis Thomas, James Kennedy, and Patricia Thomas; nieces, nephews, and cousins; dear friends, Nancy Adams, Pattie Schultz, Sara Schmerbeck, and Jennifer Gefell.
Anita grew up in Rochester and graduated from Nazareth Academy. It was here she became known for her pranks on the nuns. Her first job was at Howard Johnsons Restaurant for about a year until she took a summer job at Rochester Products. This eventually turned into a full-time position in assembly & inspection for 13 years. This is where she met her husband, Douglas, while he worked as a stock handler. They were married in 1985 and quickly started growing their family of 2 children. In the late 1980s she became a stay-at-home mom. During that time to earn some extra money, she worked for Fisher Price putting together firetrucks until that location closed. She was actively involved in each of her children's extracurricular activities and education while volunteering at their schools. This included running Santa's Secret Workshop and being the Leader in her daughter's Brownie troop.

Anita truly enjoyed her summer camping trips with her husband, kids, group of neighbors & friends where she was known as "Safety Mom" for protecting the kids from walking around the campfire! Her trips included the 1000 Islands, neighboring Finger Lakes, Cape May, and the Catskills where they took a train ride to NYC & many other places. Anita and her husband eventually got a permanent site at Brennan Beach RV Resort where they stayed for 5 years. She loved watching reality tv shows including Dancing with the Stars. She enjoyed watching her family & grandkids play sports, dancing & everything else they loved. She was lucky enough to see Cher in concert and meet her childhood crush Donny Osmond in Las Vegas! She enjoyed crafting and making things for the family in her spare time, attending craft shows and going to garage sales and the Hilton Apple Fest. Most importantly, just spending time with family and friends.

Anita was adored by her husband, children, grandchildren and brought smiles to the faces of her friends & Grammar school classmates. She always put others before herself no matter what. Anita was the best wife, mother, sister, mother-in-law, and an amazing Nana & Gramma whom we will continue to treasure with all our hearts. Her selflessness and generosity will forever be remembered and missed by many.

All rights reserved. This obituary is also archived at obittree.com